Ike & Tina Turner's Spectacular Soul Revue electrified a nation. Capture the excitement yourself on this nonstop high-energy show featuring some of their biggest hit songs from the early seventies. 30 minutes. 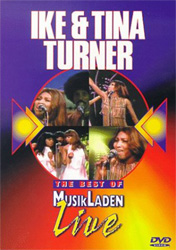 Superb musicianship and artistry come blazing through in these rare and
exciting performances of artists and groups of the '60s, '70s, and '80s.
These are the international stars that were part of the televised monthly
music show.
Beat Club and MusikLaden. Filmed in Germany at the television studios of
Radio Bremen, MusikLaden (originally known as Beat Club) became a
TV classic not only for the fans, but also for the artists who took part.
There was no time limitation on song length so artists were able to
perform live concert versions of their most popular hit songs.