Originating at 8PM on the US West Coast and with over 20 full length songs this concert went late into the night back east to the delight of the TV viewers who were insomniacs. Rod almost, 37 years, here is quite agile here moving all over the stage with each upbeat number. He went with his roots performing early Rock standards "Little Queenie","Sweet Little Rock And Roller , "Tear It Up", "Dance With Me" and the soulful " If Loving You Is Wrong I Don't Want To Be Right".
Rod is joined by Tina Turner for " Hot Legs" and "Get back" and by Tina and Kim Carnes for"Stay With Me". He sings many of his signature songs including "Tonight's The Night ", Do You Think I'm Sexy", "You're In My Heart" and "I'm Losing You".
Rod sings "Young Turks (Young Hearts Be Free Tonight)" accompanied by the hit video, and the autobiographical "I Was Only Joking" to a slide show with pictures from his youth.Rod does some fancy soccer footwork throughout.
Rod closes with "Maggie May"and then plenty of balloons are released. 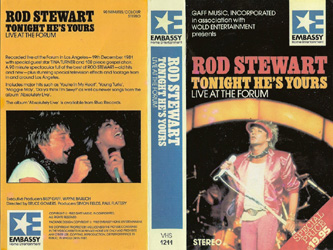